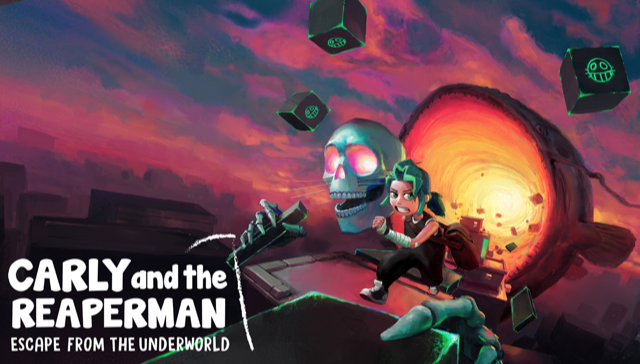 Odd Raven Studios and Perp Games are delighted to announce that Carly and the Reaperman: Escape from the Underworld will release physically on PlayStation VR on March 6th in EU Territories

In this platforming adventure, you’ll need to avoid pitfalls, solve puzzles, and build your way through various obstacles, either alone or with a friend, in order to escape the nefarious Underworld.

This award-winning adventure sees you play as both Carly, where she co-operates with a block-building – and throwing – Reaperman.

Players can either control both characters individually or play locally with a friend across 50 levels of platforming fun.

You will need to rely on the abilities of both in order to survive and make it through to the next level by rotating levels, gathering cubes and planks for stacking, and earning collectibles throughout the journey.

Each player will see a different screen with one playing as the Reaperman in the PSVR headset and the other playing as Carly on the TV. This will encourage communication and creative thinking as there’s not always just one way to finish a level. In Carly and the Reaperman, co-operative play is encouraged to get the most out of the game.

Throughout the game, you will also be able to unlock various hats and customisable to mix up the gameplay aesthetic as you dare to face the horrors of the Underworld.

Of the announcement Johan Högfeldt, CEO and Lead Developer of Odd Raven Studios, says “Doing a physical release of Carly and the Reaperman is truly a childhood dream come true! If you add the fact that we are doing it with Perp Games, who have a long and successful history of launching VR games on the physical market, we couldn’t be happier. We hope that this will allow more people to discover the magic of sharing a VR adventure with someone else.”

Rob Edwards, Managing Director of Perp Games, loves the emphasis on co-operative gameplay in Carly and the Reaperman. “Working together to solve puzzles, with increasing difficulty and new challenges emerging, Carly and the Reaperman is an exciting example of how effective co-operative gaming can be in Virtual Reality, and we’re delighted to be working with Odd Raven on their groundbreaking debut title.”

Carly and the Reaperman: Escape from the Underworld comes to retail on PSVR in EU Territories on March 6th