2018 has been a packed year full of some incredible VR experiences, from horror to action adventure, puzzle-solving, and everything else in-between.

But one small mouse seems to have captured the hearts and minds of everyone, becoming something of a mascot for the hardware.

Now as the nights get darker and the days grow colder, award season is in full swing and Moss is rightfully being recognized for its impact on the industry.

Among other accolades, Quill was nominated for the Best VR Game and Best PlayStation Game at this years’ Golden Joystick Awards. Both are extremely competitive categories, no doubt about it, but here are five reasons why Moss deserves your vote before it closes on October 25th.

5. A mascot brought to life

With Quill, Polyarc have created a lead character that is immediately memorable and identifiable. Despite being a small mouse with a red sash and a sword on her back, something about Quill feels very real, making this whole experience quite magical.

This is down to the well timed, interactive animation which brings the character to life, giving her an essence and a soul. But also the stunning artstyle, small touches and amazing attention to detail the team worked tirelessly on.

So much is the impact of Quill and Moss that often when people think about Virtual Reality and games for the medium, her face is the first that pops into their minds.

Comfort in VR has certainly been a stumbling block during the early stages of development with continued issues around motion sickness and nausea. But this is a balance Polyarc struck perfectly with Moss.

Whether you’re playing VR for the very first time or you’re a seasoned pro, you can pop the headset on and immediately feel comfortable in this beautiful world. Coupled with the family focus, Moss is an extremely approachable VR game with intuitive design and friendly charm. 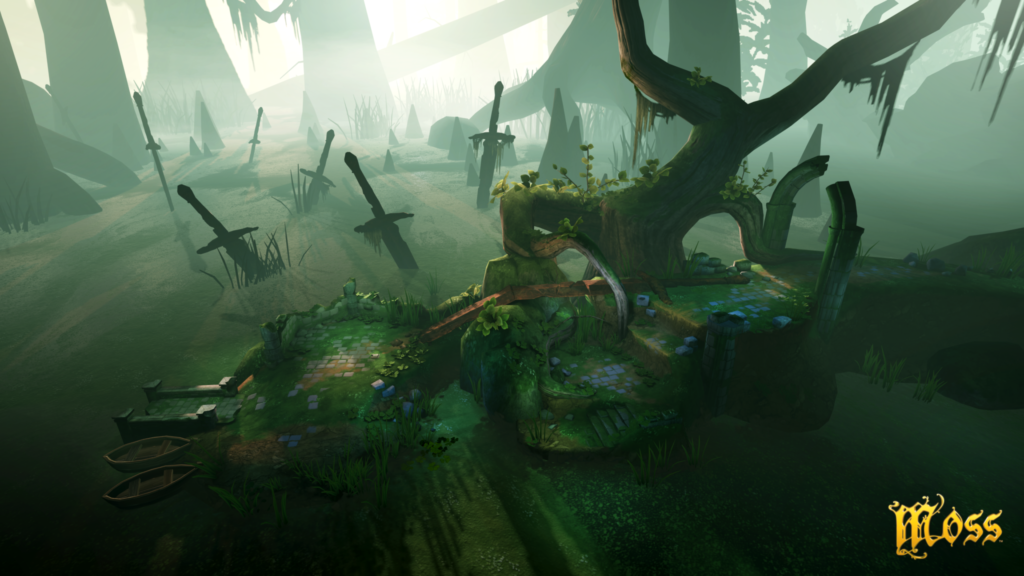 Polyarc have made it no secret that they would like to see the adventures of Quill continue and that this could be the beginning of a much bigger story.

In a recent Reddit AMA, they even shared some details of what was cut from the original game due to time constraints and could appear in future stories, such as “Quill’s ears pointing toward sound sources’, like the ability to talk to Quill using a microphone and ‘being able to dig out holes in the ground to uncover other hidden paths and treasure’

Polyarc are an incredibly ambitious young studio who want to push the boundaries of what’s possible in VR and have already helped reimagine the platformer for a whole new audience. This is a franchise and studio worthy of your support as they try to grow the medium for the next generation and beyond. 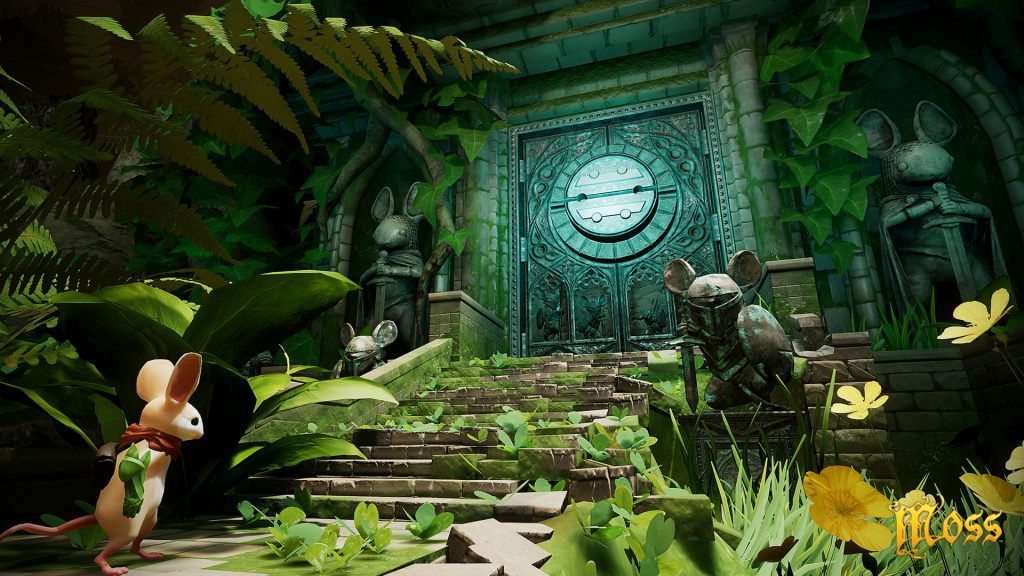 Something quite remarkable about Quill is how she responds to the player and the authenticity of your interactions with her.

As you move your head, Quill will track you to make eye contact. She’s aware of you peering over her shoulder and will respond in kind when you wave at her. But you can also give her a high five to celebrate and pet her when she’s scared. The connection with the player is outstanding.

But something else that’s truly incredible is how she responds back with sign language, making Moss an extremely inclusive game for those who are deaf and hard of hearing.

We’ve never been able to interact with an in-game character quite like this before as Polyarc have shown that the possibilities with Virtual Reality are almost endless. 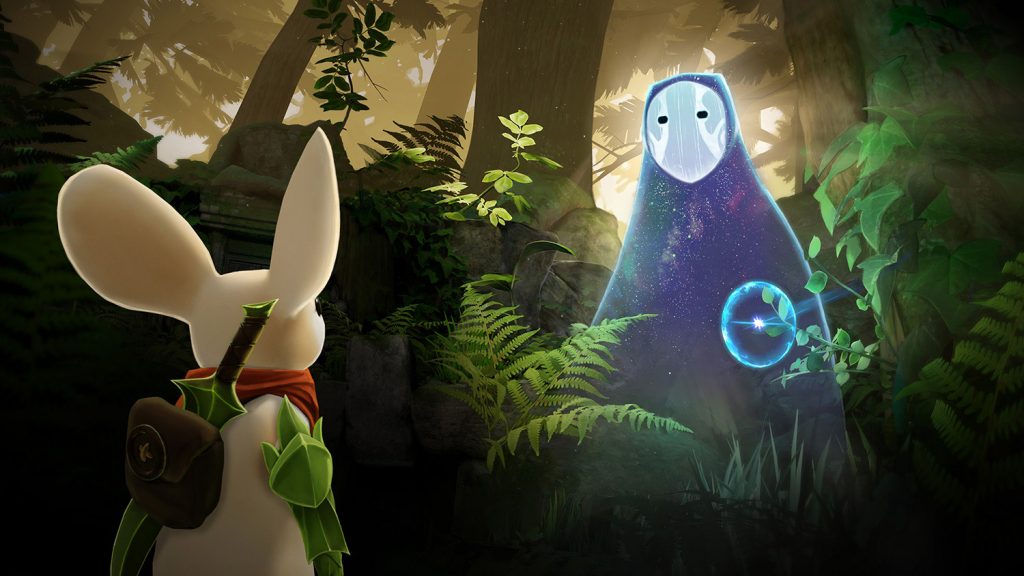 Moss seems timeless and magical. Every sight and sound has a meaning, each puzzle still feels satisfying to solve, whether it’s your first or third time.

This is an extremely special adventure that is full of heart and soul but one that offers an escapism to an intriguing fantasy world unlike anything else we’ve seen in VR. Whether it’s your heart melting watching Quill struggle to climb over an obstacle, the opening of the book as your adventure begins or looking into the water to see your reflection, Moss is full of cherishable, lasting moments which stay with you.

Moss truly opened the door to what’s possible in VR and helped us imagine a future even more exciting than we ever dared dream.

Thanks for taking the time to read and consider this post. If this has inspired you to vote in the Golden Joystick Awards for 2018, head over here

Perp Games are extremely privileged to work on such a fantastic game and we wish Polyarc every success for the months and years ahead. 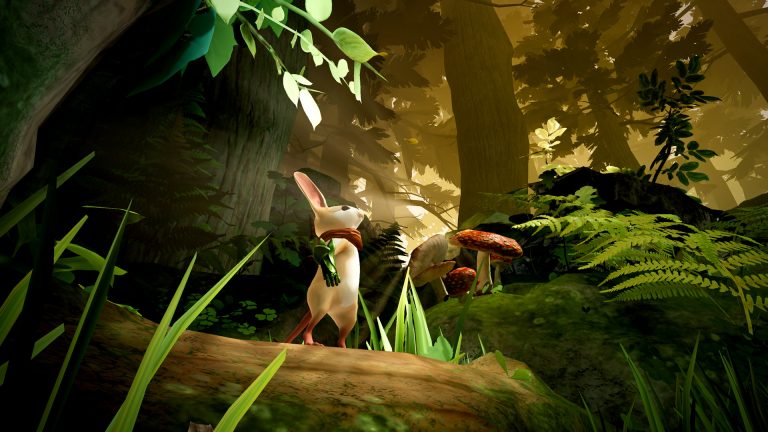